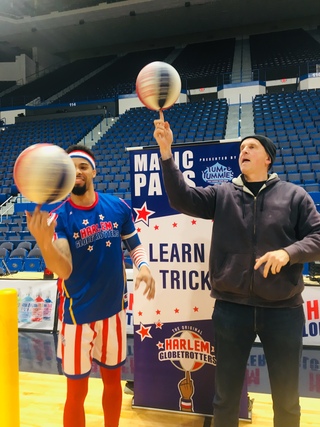 Saturday night saw one of the pinnacle achievements of my life.  Twelve months before, while attending a Harlem Globetrotters game with my daughter, I announced that I was going to learn how to expertly spin a basketball on my finger just like the Globetrotters do.   Ever since then, I have carried a basketball in the ambulance.  In between calls while at posting locations, I have taken the ball out and practiced.  At home I have a basketball in every room of the house.  I even found a heroin addict in Hartford who for $5 a pop would give me spinning lessons. He was an ex-basketball player, who I am pleased to say now has a handyman business and is no longer on the street. (At least that was his plan when a few months ago, he told me I wouldn't be seeing him around anymore, and true to his word, he disappeared no longer to be seen at his regular haunts.  I can only hope he is doing well).  I practiced so much I developed tendinitis in my elbow and had to suspend all spinning for a month. The elbow is much better and I can spin again without pain.

When I received notice that the Globetrotters were coming back to Hartford for their annual visit, I purchased Magic Passes for my daughter and I as well as third row seats at mid-court.  As a returning attendee, I took advantage of the 50% deal when the tickets were offered in a special pre-sale.  The Magic Passes entitled us to attend a pre-admission event where we could meet the players on the court, shoot baskets and spin basketballs.

Thanks to my daughter, my tryout was recorded for posterity.

We had a great time, the Globetrotters stormed back from a 9 point deficit in the 4th quarter and beat the hated Washington Generals in a thrilling victory.

While I was not offered a contract, I did have the opportunity to buy an official game ball for $60 and a Washington Generals t-shirt for $25.

I write all of this because my ability to devote a year to spinning a basketball is one of the great side benefits of being in EMS.  Over the years, EMS has allowed me to pursue a variety or hobbies and interests while at work getting paid simply to be available to respond to emergency calls.  In the 30 years I have been involved, I have read the works of Shakespeare, written five books and countless blog posts, learned to play poker (and when it was legal to play on-line, made a fair amount of extra cash), trained for triathlons and Tough Mudders (when I was assigned to a contract town, I was able to ride my bike on a 0.7 mile loop around the industrial complex where the ambulance base was located -- my longest at-work ride was 26 miles), learned to speak Spanish, failed in an attempt to learn Vietnamese, wrote a food blog on take-out food in Hartford, trained to perform a 100 push-ups in a row (okay, so I only got to 79, and started cheating at 57), amassed one of the nation's premier heroin bag collections, and now have learned to spin a basketball.

So what's next?  I think I will work on my balance with a goal of standing on one foot for ten minutes.  My longest time on 10 tries today was 1 minutes and 49 seconds on my left foot and 1 minute and 36 seconds on my right.  I am six foot-nine and sixty years old, so not only is my balance not great, with each advancing year it becomes less so.  I need to improve upon it if I am going to be able to keep at this job I love.