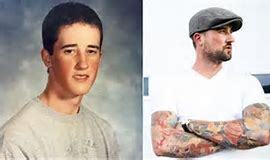 I attend the Department of Public Health's 2019 Connecticut Opioid & Prescription Drug Overdose Prevention Conference on May 2. The featured speaker is Austin Eubanks, a survivor of the Columbine shooting. He and his best friend were golfing and fishing buddies. He shows us pictures of the two of them smiling, no idea what fates life had in store for them. In the school library, they hear an odd sound from out in the hallway. Another student says it sounds like gun shots. But they are in a school. Guns aren't allowed in schools. (This was of course the first mass school shooting, while today students drill for such occurrence). Then more commotion and a teacher bursts into the room and says "Everyone get under the tables!"

Even with that they stand around for a moment, thinking "really?" Then the gunmen, armed with shotguns and automatic weapons, enter the library. His best friend and he hide under a table as the shooters walk through the room systematically executing their fellow students. They are under the last table. His friend is killed instantly, while Austin is shot in the hand and knee.

He survives only by playing dead. He tells us how detaches himself from the scene. Later when he is rescued and meets his father, he bursts into tears, the emotion finally ripping through him. But then he is medicated for his injuries. Doctors prescribe him heavy doses of very powerful drugs. He is seventeen years old and has never drunk a beer or smoked marijuana.

He tells us that what the opioids he is given do best is not affect his physical pain, but they take away all his emotional pain. They enable him to block all his emotions. While his physical pain subsides in a matter of days, his emotional pain is still off the charts. He keeps taking the medicine –at times more than he is prescribed — because it is working for his emotional pain — blocking the horror of what he has been through and the thought of all his slaughtered friends. The pills provide an escape that quickly leads to addiction. Within a matter of months he is not only drinking alcohol, but as his tolerance for opioids has increased, he is now obtaining pills and illicit drugs on the black market.

He uses all these substances for years to manage his emotional pain, which is not addressed by any of his doctors. Because he is able to put a tie on and go to work, he fools people, he tells us, but his life eventually unravels completely. He uses heroin, methamphetamine and other pills to keep his emotional pain at bay and to keep from feeling the sickness of withdrawal. He loses his job, his family — he is married now with a son– breaks apart. After more than a decade of struggle, he finally makes it though multiple recoveries and finds his way home. He reunites with his son and becomes good friends with his ex-wife, remarries and has another son. He becomes a committed advocate and travels the country speaking about the opioid epidemic, offering messages of recovery and hope. He tells us how important his family is to him now, how grateful he is to have found his way home.

He tells us about the difference between feeling better and being better. He urges us to pay close attention to people's emotional pain. He brings the message that those addicted are not junkies and scumbags, but our brothers, sisters, parents and friends. He receives a standing ovation from our packed conference crowd of nearly 300, all people dedicated to battling the opioid epidemic.

Three weeks later, I open up the newspaper to see the headline Columbine Shooting Survivor Found Dead. His family issues a statement:

"(Austin) lost the battle with the very disease he fought so hard to help others face."

Was he using when he spoke to us. Were we fooled because he had a tie on and spoke without slurring his words? Or did he relapse after? It doesn't matter. The point is the battle is never over.

I wonder what would Austin's life have been like had he not gone to school that day twenty years ago?

Thirty-seven-year olds die of opioid overdoses daily in this country. How do people think of them? Are they scumbags and abusers? Are they the unclean? Or are they members of our community? People to be cared for and shown love and mercy?

How close we all are to our lives suddenly falling apart. I think of all my patients who look up at me with irrepressible sadness as they say, "I used to normal once."

The scenarios are there for misfortune to knock on any of our doors.