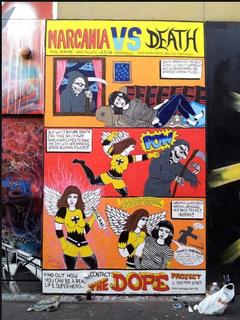 There is a cartoon hero named Narcania created by the same guy who wrote Lil'Dope Fiend Overdose Prevention Guide."  In the mini comix, Narcania rescues people who have overdosed and gives them new life.  As one character who has been resuscitated remarks, "I don't know if there is anything worth living for, but at least now, I'll get to find out!"

In San Francisco there is a Narcania mural, Narcania vs. Death proudly painted in an alley.

In 2017 I wrote about Narcan Man, the mysterious person or force who seemed to always arrive and be gone before us, leaving only an empty vial of narcan and sometimes a confused, or vomiting person at the spot where we were dispatched for the overdose.  I imagined a man with bandoliers of Narcan and a gold tooth who roamed the metropolis, keeping people safe, and then disappearing into the mist.  Who was that man?!

I believe I have finally met the real life Narcania, the female Narcan Man.

Her name is Carrie.  She is a smallish woman in her late twenties, whose face shows both the promise of her youth and years of hard living.  Her voice is gravelly from cigarettes, and her eyes are hardened blue grey.  I've seen her walking Park Street and I've seen her helping out at the work harm reduction van.  And most recently I've seen her at a number of overdose scenes, where she stands to the side and disappears once we arrive.  I know her well enough now to call her by name and to chat a little.  One of these days I want to talk with her at length and learn her true story rather than one I might imagine.

This time  she was walking through the park ravine when she came across a man half hidden by a pile of logs.  He was unresponsive and cyanotic with agonal breathing.   She hit him with 2 mg of Narcan in the leg with her autoinjector and gave him some good hard shakes until he came around.  When she saw it was me getting out of the paramedic vehicle, after I'd driven down a dirt road and across a field to get to the OD site, she stayed.  The man didn't want to go to the hospital, but she was able to convince him to go.  I let her do the talking because I knew he'd be more apt to listen to her than me.  While I walked him to the arriving ambulance, she gathered the belongings he had left and brought them to him.

Once he was loaded in the back of the ambulance, I turned around to say goodbye to Carrie, but she was already walking across the field.

"If she hadn't found him, he would have been dead," I said aloud.

I waved to her, and she gave me a little salute in return as if she were a cowboy and was tipping her hat to the townspeople as she rode off into the sunset.

"Who's that girl?" One of the firemen asked me.

"That," I said.  "That there little woman is Narcania!"

"I read about her in the comix!"