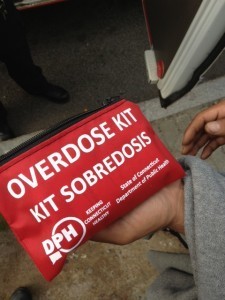 I'm on scene of an overdose. A fifty year old man in an unkempt apartment went unresponsive after sniffing two bags of heroin. His neighbor found him, giving him 4 mgs of Naloxone IN, and then called us. The man is alert and oriented by our arrival and does not wish to go to the hospital. The neighbor says he will watch the man. The neighbor still has another Naloxone in case the man goes out again. He says he gets his Naloxone from the local harm reduction agency.

The cop on scene shakes his head and says, "They'll give out Naloxone for free, but kids have to pay $800 for an Epi-pen."

This is an argument I hear quite often. "They'll give a drug addict free Naloxone, but my wife, who is a school teacher, has to pay $1000 for her Epi-pen."

What is the implication behind the officer's remark. Is drug user's life less worth saving then a kindergartner who mistakenly eats a cookie with nuts in it?

Last year over 70,000 Americans died of accidental overdoses. Only about 150 people die a year from fatal food anaphylaxis.  3,000 die from any type of anaphylaxis.* Each of these deaths were preventable. Were the 70,000 who died of overdose all scumbags who willfully chose to become addicts? Were those  Americans who died of anaphylaxis all a higher class of citizen?

"Well, the junkies made a choice to use illegal drugs," an EMT says.

In EMS we talk all the time about the lack of respect we get as a profession. What makes us professional?

Is it how spick and span our uniforms are? How shiny our badges?

Or is it the way we treat our patients? The compassion in our hearts that recognizes the humanity of all our people no matter their circumstance?

Recently a local fire department in its annual CPR lifesaver awards ceremony, chose not to honor its members who had saved overdose victims from cardiac arrest, alongside those who had achieved ROSC in victims of heart attack or other "medical" cause.

There is too much hatred in the world. There is no place for it in EMS.

We should never pit patients against each other.

We should embrace programs like community Naloxone in the same way we should embrace efforts to hold pharmaceutical companies responsible for price-gouging families for the costs of Epi-pens.